We are very blessed to have Pastors David and Paula Mahawon (Trumpets of Christ) ministering this coming Sunday.  Please join us.

Sunday Morning Services meet at:
The Champlin Ice Forum, 12165 Ensign Avenue
(North 169 – turn left at 120th Ave. — at the Holiday station.
It is located next to Lifetime Fitness) 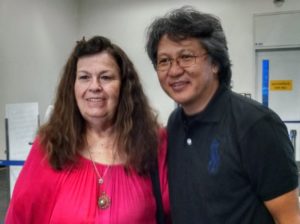 David is a Shan from one of the largest unreached people groups in SE Asia. He has a true and dedicated heart to reach his people, as well as the multitudes of other unreached people groups. He is a graduate of both Victory Bible Institute and Victory World Mission Training Center of Tulsa, OK. He has worked in missions in Mexico, Burma, Philippines, Malaysia, Thailand, China, and Singapore.

Paula is also a graduate of Victory World Missions Training Center. She has served the Lord faithfully on the mission field since 1984 in Guatemala, Nigeria, Burma, Thailand, Philippines, Malaysia, Singapore, Laos, and Vietnam.

Below is additional information on their ministries.

Pastors David and Paula Mahawon have served the Lord in Southeast Asia since 1984. They began Trumpets of Christ (TCI) in 1992 with the purpose of reaching the unreached people of SE Asia in the 10/40 window for Christ. Their mission is to present the Gospel and hope of Jesus Christ by ministering to the physical, emotional, and spiritual needs of these unreached people groups. They also teach and empower them as leaders to reach and disciple others. They now serve as apostles for Trumpets of Christ (TCI) ministries and churches.

Trumpets of Christ International (TCI) has been a ministry vehicle dedicated to reaching and educating the more than 30 million Shan or Tai people of Southeast Asia for the Lord.

The Shan are one of the largest unreached people of the 10/40 window. You will find Shan people located in N. Thailand, N. Vietnam, S. China, Burma, and parts of N. India. Recently, TCI has also begun work with other people groups located within the 10/40 window.

TCI is also involved in establishing short-term Bible schools in areas where people are not allowed to travel. They are also translating the Bible into the modern Shan language. They have completed the Book of John and are currently working on translating the rest of the NT from the traditional Shan into its equivalent modern usage.

Faith Village Children’s Home (FV) is a ministry of Trumpets of Christ International that is dedicated in rescuing and educating children who are in need.

Previously called House of New Vision, Faith Village was founded in 1996 by Pastors David and Paula Mahawon. They began rescuing children in 1995, when they were impressed by God to rescue 36 boys. In a dangerous escape that only God could do, the Mahawons established a safe home in Thailand to care for, raise, and educate these young men in the hope and truth of Christ.

Faith Village is a safe haven for children who are orphaned, abused, in danger or have been trafficked for child prostitution or slave labor, and forced into rebel armies. The children are educated, fed, clothed, and mentored by staff of TCI. Faith Village property is located on the TCI Campus and has several buildings which include boys’ and girls’ dorms, a church, a schoolhouse, basketball and soccer fields, a playground, an indoor gym/game area, a store, a cafeteria, and staff housing.