We are very blessed to have Rev. Dana & Liz Nile ministering this coming Sunday 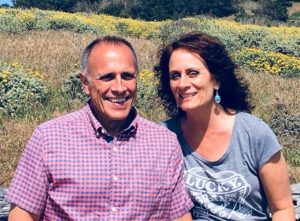 Ends of the Earth Ministries
http://endsoftheearthinc.com

Ends of the Earth Ministries is active in supporting Churches and Christian leaders around the world. Dana and Liz are obeying the call to “GO!” The Father is waiting for the precious fruit of the earth! Every tongue and tribe is the target!

We will also have a guest minister’s luncheon after church. If you would like to join us — please RSVP at: sjfix@comcast.net

We are meeting at:
The Champlin Ice Forum, 12165 Ensign Avenue
(North 169 – turn left at 120th Ave. — at the Holiday station.
It is located next to Lifetime Fitness)

Below is a Bio on the Niles:

Dana and Liz began full time ministry in 1984, when they accepted a four year missionary assignment to Nepal and moved to a remote Himalayan region previously unreached by the Gospel. They ended up in a village area that was two days walk from the nearest road. During their time in Nepal, the Lord supernaturally directed them to a Nepali baby and Lydia Subhadra was added to the family.

In 1989, Dana Liz and Lydia moved back to Montana and pastored a church in their home town of Forsyth. In 1991, the family grew to four as the Lord brought them a Korean baby boy, whom they named Jonathan Lee Nile. 1993 brought a move to Tulsa, Oklahoma for two years of intense study at Rhema Bible Training Center and the beginning of ministry to the former Soviet Union. Also, while at Rhema, the family grew to six, with the addition of another adopted son, Josiah, and the miracle of a biological daughter, Lura after eighteen years of marriage.
After graduation in 1995, Ends of the Earth Ministries was born, sending the family to Omsk, Russia and a Siberian winter of pastoral ministry. Their time there was cut short when their son Josiah was found with a rare heart tumor, and after an epic fight for his life, went home to heaven from Helsinki, Finland. They then returned to America and to itinerant ministry that took them around the states and frequently back to Russia.
Dana and Liz then answered a call to pastor at Today’s Harvest Church in N. Myrtle Beach, South Carolina.
1998 to 2013 brought fifteen years of rewarding pastoral ministry. Hundreds of people were impacted by the Word and the Spirit of God. People were born again and helped to become fully functioning followers of Jesus. Close to fifty people graduated from the AFCM Bible School, most of whom went with either Dana or Liz on short term mission trips.

•Dana holds a Bachelor of Science degree from Montana State University and a diploma from Rhema Bible Training Center
•Since 1991, both Dana and Liz have held ordination credentials with AFCM (Association of Faith Church and Ministers)
•Since 1995 Dana also holds ordination with Rhema Ministerial Association (RMAI)
•2004 Liz graduated from AFCM ITC Bible School.
•2001 – 2013 served as AFCM Regional Directors providing support, leadership and oversight to area ministers.
•2013 accepted new assignment as AFCM Mission Team Leaders. They have been tasked with building a team to strengthen and further establish AFCM’s network of missionaries.